Where were you when the world ended? 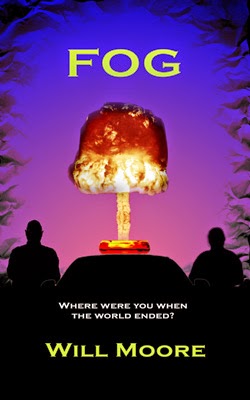 The second novel from Will Moore. A tale of post-apocalypse survival.

It arrived with a double-flash and a silent pillar of fire rising into the sky. Our neat, ordered, world was turned completely on its head. It went something like:

Nobody at the time realised that 'world order' would switch from 'old' to 'new'. And why should they? The full implications of that pyrotechnic display didn't sink in right away.

But I'm jumping the gun. The day started in the normal way, for a Wednesday. It was a beautiful spring morning, full of promise for another agreeable day whiling away the hours, doing not-much-at-all, until it was time to come home. Brody dropped by to collect me at 09:30, and then we drove off to pick up Fred. The leafy Cambridgeshire lanes looked particularly fresh and green. The recent rain had revitalised the countryside and it was looking like the warm spring weather might turn into an early summer. How wrong we were.

Fred's stop took longer than mine. He's not very nimble on his feet these days. Or as he would say, 'I'm not so steady on me pins'.

I shrugged. Brody could be a bit blunt at times.

Eventually, Fred reached the door. When our little Wednesday outings had first started, Brody had offered to help him get to the car, but Fred wouldn't hear of it. He always tried to be independent like that, Fred did. Still does.

"Morning Tommy, Brody. And what a lovely morning it is," said Fred. Always vocalising. The way he can't stop talking, I swear he's got East End blood in his veins.

"If you say so," replied Brody.

I said nothing. I don't vocalise.

"Be there in half-an-hour," said Brody.

Fred had tried to find out if 'Brody' was his first name or his surname, but Brody was bent on keeping it a mystery.

"What's it to anyone anyway? That's my name and that's what you call me," he had said dismissively.

I had quickly lost interest in the big secret. Fred had only been trying to break the stretches of silence during the car journeys.

"What do you think of the new girl?" said Brody. It brought me back to the present.

"Well, you can still window shop can't you?"

I don't talk to her. It's not that I don't like her; I do. She's a pretty girl. No, stunning is the word. Maybe a bit on the young side. The main problem, though, is that if I try to say anything to her, I'd get embarrassed - yes, even at my age - and it'd come out all wrong. The words would trip over themselves and spill out in a complete jumble. I'd sound like a moron. I have my pride and I wouldn't embarrass myself or the girl. So I nod and smile and make non-vocal, 'u-huh' sounds.

"What about these terrorists then?" said Brody changing the subject. "They reckon they've got nukes. Got them from Pakistan."

"Yeah, well," said Fred. "They've been saying that for quite a while now. They'd have to build them and ship them round the world. How are a bunch of amateurs going to do that?"

Fred was trying to apply Fred-logic to the world. Those guys didn't think like that. Our reasoning didn't apply. You could get caught out thinking that it was a game of cricket, or that the Queensbury Rules applied. Like we got caught out in the South Atlantic.

"Anyway," said Brody, "we'll be there in less than half-an-hour. What've you guys got lined up for today then?"

"Sitting in a circle looking gormless and pissing our pants, I would imagine," said Fred, ever the optimist.

I just shrugged. He was probably right. Only, we never got to find out.

A bright ball of fire rose silently into the sky on top of a pillar of flame. It didn't make a sound.

Seconded. My heart sank. I'd hoped never to see that sight in my lifetime. Not for-real anyway.

"Four minutes," I managed to blurt out.

Will
Hi. I'm Will Moore. I live and write in Hertforshire, in the UK.